5 Reasons Not to Have a Direct Anterior Total Hip Replacement

The direct anterior approach (also known as the Smith Peterson approach) has been around since the early days of hip replacement and is not new. Its popularity waned throughout the 80s, 90s and early 2000’s because the posterior approach was considered faster and easier and more applicable to a wider range of hip problems. For complicated cases that may involve congenital deformity or those with prior hardware such as from a previous fracture, the posterior approach offers surgeon an easier ability to extend the incision and dissection if necessary to gain wider exposure.

Around 10 years ago, the direct anterior approach enjoyed a resurgence in the United States when pioneering surgeons, such as Joel Matta, MD, refined modern techniques, instruments and operative tables to facilitate the approach. Proponents of the anterior approach cite that it is more muscle spare and does not require the release of any muscles to gain access to the hip joint. In an age where rapid recovery has become a common buzzword in joint replacement, the idea that this approach could lead to faster return of function resulted in a huge surge in popularity including in the lay press publications like the New York Times and Wall Street Journal. Despite an absence of clinical data proving its merits over other approaches, the purported advantages created a demand for this approach that forced many hip surgeons to adopt it for fear that patients would go elsewhere to find and anterior hip surgeon. 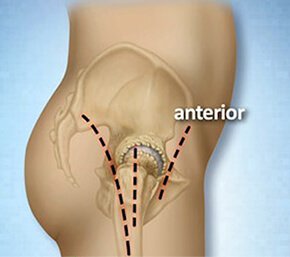 As 10 years have passed and comparative clinical data has now become available along with studies on other outcomes and complications, the comparative benefits of the anterior approach are less clear than the original buzz suggested. In fact, there are some clear disadvantages to the approach that patients should be aware of when considering hip replacement surgery. There are also certain cases where an anterior approach may be beneficial such as obese patients who carry much of their extra weight in the buttocks region. Truth be told, patients can have excellent outcomes after hip replacement using any approach with modern techniques and implants, optimal pain management and preoperative preparation. Picking a skilled surgeon with an excellent track record is more important than shopping for a surgical approach.

#5: The contention that the anterior approach is entirely muscle and capsular sparing is actually not true. Most conventional direct anterior techniques require division of the anterior capsule, release of the iliocapsularis and indirect head of the rectus muscle and release of the posterior superior capsule to facilitate femoral exposure. The piriformis muscle is also released commonly if femoral exposure is difficult and, other than the anterior capsule, these structures are not repaired at the end of the case. Conversely, while the posterior and superior approaches require release of the piriformis tendon, it is repaired at the end of the case.

#4: You cannot assess the hip abductor tendon through the anterior approach. Tears of the gluteus medius and minimus tendon are not common but do occur and can be repaired through other approaches. These tendons can neither be seen or assessed or repaired through the anterior approach. Similarly, any inflammation in the trochanteric bursa cannot be removed. 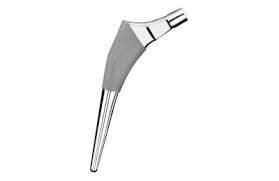 #3: The anterior approach only allows the use of ML taper stem, broach only stems. While these stems do have an excellent overall track record, they also lead to a higher risk of periprosthetic fractures and early loosening, especially in younger males with thick outer walls of bone and a thin canal in the upper femur bone. In such cases, the bottom part of the stem may engage the bone before the top part achieves rotational stability. This early loosening can require revision surgery and the revision surgery often has to be done through a posterior approach. The posterior and superior approaches allow the surgeon to select the optimal stem that will best work for an individual patient’s boney geometry 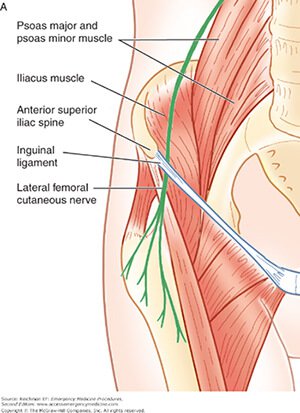 #2: Injury to the lateral femoral cutaneous nerve is quite common after the direct anterior approach and can sometimes lead to permanent numbness in the thigh or prolonged neuropathic pain. There is no good solution for this problem and while it is not debilitating, it results in nuisance symptoms that are not present from other hip approaches. In addition, scaring around the tensor fascia lata muscles can sometimes result in muscle discomfort in the thigh. This is also rarely seen in other cases.

#1: When minimally invasive surgical techniques, patient preparation and advanced pain management solutions are employed, there is no clear advantage to this approach over others and this has been born out in the medical literature.

NAVIGATION is both the FIRST AND LAST step in the AVATAR process. We will be ushering you through the entire experience making sure nothing falls through the cracks. CALL US or TEXT US FIRST with any concerns or questions.

For total knees, continuous motion is vital to prevent scarring and stiffness. Upon arrival at home, a physical therapist will visit and work to progress motion, walking and strength. When no longer homebound, outpatient physical therapy will continue for a few weeks.

A physical therapist will work with the nurses to begin mobilizing to a chair while monitoring vital signs like blood pressure. They will encourage joint motion and then start the process of walking with a walker and managing stairs. This may take 2 to 5 hours before walking and stairs are deemed to be safe.

The recovery room (PACU) stay will be about an hour or less while the sedation wears off Post-operative pain is normal and the nurses have ways to help control discomfort while administering IV. Hydration. We encourage light eating and drinking and then begin moving the joint right away.

For both Same Day Surgery and overnight surgery, our goal is to manage the entire experience with a focus on safety and comfort. Even though patients are asleep for surgery, regional anesthesia (nerve blocks) are preferable to deep general anesthesia as there is less grogginess and nausea afterwards.